D.J. Mbenga has long felt a sense of obligation to help his home country. During a recent conversation, the former Laker began talking about his Mbenga Foundation. It helps educate children in the Democratic Republic of Congo, builds clean water wells, and advocates for sexual assault victims. He shared the concerns, from orphanages he tries to help, about how the COVID-19 pandemic will affect the region.

He has always felt passionate about these causes, but a recent personal tragedy has made his need to help more acute. Last month, his sister, Yvonne Mbenga, contracted COVID-19 . A diabetic in her 50s, she was having trouble breathing. By the time doctors examined her, the virus had done enough damage that they weren’t able to save her. He couldn’t fly to Belgium for her funeral and had to watch online, as did several other members of his family. Advertisement “It was just so hard,” Mbenga said from his home in Dallas. “That’s why I dedicated myself from my sister, I’m just going to fight for everything. Like everything I’m going to fight for. To help those kids, to help everybody, to help women especially.” Seeing Yvonne lose her life in Belgium made Mbenga worry even more about Congo, where his foundation supports three orphanages, including one in his hometown of Kinshasa. Lakers NBA players union asks players if they want to finish season Lakers NBA players union asks players if they want to finish season The National Basketball Players Association asked players in text messages if they were in favor of returning from the coronavirus shutdown. More Coverage Mamba Sports Academy retiring ‘Mamba’ out of respect for Kobe Bryant’s family Earlier this spring, UNICEF expressed concern over how the pandemic would affect the region, given its “battered” healthcare system, which already is dealing with measles and cholera epidemics, as well as recent battles with Ebola. Advertisement Mbenga said the orphanages he helps support have had cases of COVID-19, and they’ve struggled to maintain sanitary environments. They have such a shortage of masks, he says, that nurses are washing and reusing masks that are intended for single use. “We still are working on getting some masks and gloves and sanitizing stuff and some medicine supplies,” Mbenga said. “We have some babies and newborns at three different orphanages. Then the village has some old people as well. We give them assistance. Sometimes food, sometimes medicine. We’re still trying to find a way who can give it, who can donate.”

Since his days playing in the NBA, Mbenga has carried a sense of responsibility. He describes himself as having grown up “with sugar in the mouth,” to describe a comfortable upbringing that came with having a father who was a government official. His family fled to Belgium after a regime change in 1997. His NBA career began with the Dallas Mavericks in 2004. Mavericks owner Mark Cuban has donated thousands of dollars to his foundation in the past. He spent three seasons with the Lakers, joining the team in 2008 one week before Pau Gasol arrived, and remaining through the end of the 2009-10 season. Advertisement Lakers How the Lakers’ last dynasty ended in a total dismantling Lakers How the Lakers’ last dynasty ended in a total dismantling The Lakers’ three-peat effort derailed by the Dallas Mavericks, coach Phil Jackson departed the team, leaving Kobe Bryant to lead another reboot. He wasn’t a star in the NBA, but became a fan favorite with the Lakers — a little-used center who now chuckles as he recalls the times fans would chant at Phil Jackson to put him in the game. “Being a Laker is a privilege,” Mbenga said. “It’s something special. It’s a legacy. … One day I can say, tell my kids, I was a Laker and I played with Kobe and we won two championships.” Bryant used to ask him about his home country all the time. Those conversations mean a lot to him, especially since Bryant’s January death in a helicopter crash. The laughs they shared as teammates mean a lot to him, too. Advertisement Once, Bryant pestered Mbenga to teach him some of his home language — Lingala. Once during a game, he suddenly heard Bryant say “Get ready” in Lingala. It was a game against the Celtics and Kevin Garnett looked at Mbenga puzzled. “That was Kobe right there,” Mbenga said. Sports How the coronavirus is affecting sports leagues and events Sports How the coronavirus is affecting sports leagues and events A look at how sports leagues, including the NFL, MLB, MLS, NBA and NHL, are responding to the coronavirus outbreak. During his Lakers tenure, Mbenga held a fundraiser for his foundation at a high-end jewelry store in Beverly Hills. Bryant was the only teammate who attended. Advertisement Mbenga later learned that Bryant had a business relationship with the store. When the shop owners had asked if it was OK for them to host another teammate’s event, Bryant had urged them to do it. “I came to the locker room and I just looked at him and I said, ‘You know what, I’m not going to say anything. I just say thank you for all these people that are going to benefit,’” Mbenga said. The cause he supported during his playing days still receives his active attention. 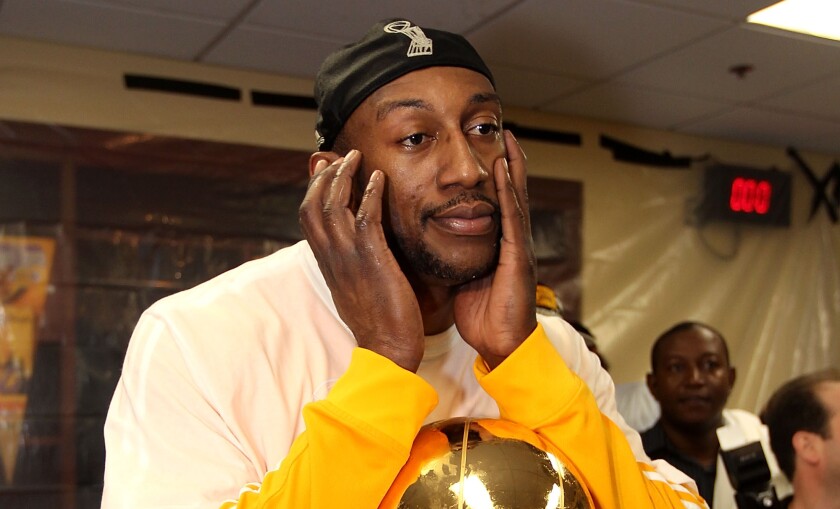 How can you help?

Your donation will help us save and improve lives with research, education and emergency care